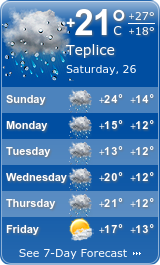 Holidays in the Czech Republic are always worthwhile and it's true - Prague is beautiful. But the Czech Republic offers a lot more! Whether you're in the Czech Paradise, in the Giant Mountains, on the Vltava or classic Spa towns of Karlovy Vary and Marianske Lazne - in this relatively small country with promising recreational areas are ranked next to one another. Over time, they have become favorite destination of vacationers from around the world. At a distance of just a few hours drive from here waiting for you a combination of culture, sport and recreation. The Czech Republic is an ideal destination for winter sports enthusiasts.

Just now, the Parliament of the Czech Republic has accepted a new constitutional law according to which 14 self-governing regions will be created 1 January 2000. No details are available and the possible use of regional COAs and flags should be regulated by succeeding laws. The regions will be (also their names are yet unofficial and will be corrected by regional assemblies after their formation

Experts speak of the territory of the Czech Republic as the roof of Europe. The main European watershed extends through the country, dividing the drainage areas of the north and south seas, which make Europe into a gigantic peninsula. Here we can even find the massif, Kralický Sněžník (1,423 meters), from which water runs into three different seas according to which slope receives rain. The North Sea, the Baltic Sea and the Black Sea meet here.

The Bohemian basin is surrounded on all sides by an important mountainous belt; only eastward from Moravia is it then separated by the lower Czech-Moravian highlands. Two of the four Czech national parks protect the border mountain ranges – Šumava and the Krkonoše. The sources of the most important Czech rivers can also be found in these ranges – the Elbe in the Krkonoše and the Vltava in Šumava.You can read more about Czech mountains online by visiting České hory or Holiday Info, where you can find rich photo galleries and online cameras. The highest mountain range in the Czech Republic is the Krkonoše, the ridge of which creates a natural border with the neighboring Republic of Poland.

The climate in the Czech Republic is temperate, transitional between oceanic and continental with typical alternating four seasons. Since the Czech Republic is small, has no great influence on the climate latitude or proximity to the Atlantic Ocean. Most so on Climate Change shows topography and altitude. Generally, the higher the air temperature decreases and rainfall increases.

The overall population growth rate is around zero (-0.08 in 2003 and +0.9% in 2004), the natural increase is negative since 1994. In the years 1995-2002 the total population has declined slightly since 2003 has been growing due to increasing immigration from abroad. The average life expectancy continues to slowly increase and exceeds 72 years for men and 79 years for women (estimate 2004).

Czech is the official language of the Czech Republic and the European Union. The Czech official contact can also be used in the Slovak Republic.